50 girls from St. Simons & St. Judes’ Girls’ Brigade have gained “Dactylology” certificates. Dactylology is the art of talking with your hands, and in November Maureen Doyle presented the certificates to girls aged 6 to 13 years.

The photo shows some of the girls practising the sign for “sister”.

Over a four week period, the girls learnt to fingerspell the Manual Alphabet and practised some basics in Sign Language, singing and signing nursery rhymes and Christmas carols.

The evening of Achievement ended with a beautiful rendition of Silent Night, signed of course!

Raising money for the NDCS
Lynn Siddle and her mum, from Craig & Taylor’s clothes shop on Lord Street, held a Fashion Show at the Prince of Wales Hotel to raise money for the National Deaf Children’s Society [NDCS]. The event raised around £800 for the NDCS, and Lynn is also planning to do a bike ride in South Africa next March, also for the NDCS.
Source: Midweek Visiter – 3 Nov. 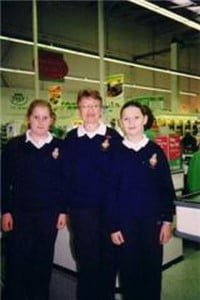 The ‘Sign Language Awareness Week’ at Southport’s ASDA store was a great success, thanks to the volunteers and those who popped in to see us during the three days we spent raising awareness to sign language.

Maureen and her band of volunteers were in the store on October 20th, 21st and 23rd from 10am till 5pm.

Money raised from our raffles came to £148, and the draw took place at 5pm on the final day. Prizes were collected from Barbara Shields at ASDA. The Barbie car was won by one of our own Monday evening class members.

Subtitled cinema
There are subtitled films shown at the Vue Cinema, Costal Road Complex, on Sundays 3.25pm and Tuesdays 6.10pm. 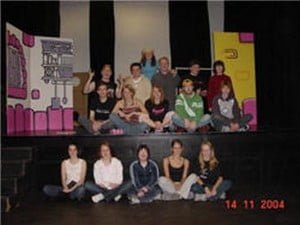 One of our members, Helen Zueger, passed an interview for Work Experience in Woolworths. She has a Certificate in British Sign Language Level 1 [Communication Section]. The Southport Visiter called Helen an “inspirational woman”. Congratulations to Helen!

Helen took part in the pantomime Katy Crackernuts at the Citadel in St. Helens in December. Helen is in middle, bottom row of photo.

Hearing gene discovery
According to Nature magazine, scientists think they may be able to develop treatments for deafness due to the discovery of the gene that controls the process of hearing. See Health Talk for more information.