Mamma Mia!
Southport Vue Cinema has been showing Mamma Mia!, an adaptation of the West End stage musical, based on the songs of ABBA.

The cinema has indicated they could provide a subtitled screening of this film either during a weekday morning or an evening if there is sufficient demand.

Please let Maureen know if you’re interested, and a group booking could be arranged.

Several organisations attended the Link/Hearing Concern event at the Prince of Wales Hotel on 8 August, including PMP, Southport Centre for the Deaf and Hear Here.

Alison Wareing was there on behalf of Hear Here. Sue was the lipspeaker.

BSL users can learn Highway Code
A new book & DVD to help BSL users learn the Highway Code has just been published. It costs £9.99 and is available from TSO Online Bookshop. 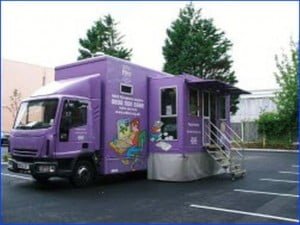 On Saturday, 5 July, Maureen & Mavis went to the Southport Centre for Health and Wellbeing on Hoghton Street to see the NDCS Listening Bus.

The NDCS Listening Bus is a touring information bus, which provides advice for deaf children and their families. Inside the Listening Bus, visitors can learn about new technology such as vibrating alarm clocks, flashing doorbells and text/video phones.

Some more photos of the Listening Bus can be found here.

PMP forums closing down
Our forums have been removed from this website due to lack of use and as such is a wasted use of internal resources. However, we still have the use of Southport Forums where you can leave messages of your thoughts, stories and ideas.

Certificate for Maureen
Maureen has been nominated for a Nationwide Community & Heritage Award. It is in the Individual category. She has received a certificate.

Good news for New Year
Good news for the New Year – we have received a £455 cheque from the Mayor’s Fund. A letter of acknowledgement and thanks has already been sent. This money will go towards paying the rent at the Marian Centre.