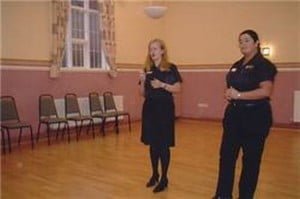 PMP members had an interesting talk on Fire Safety and prevention on Monday, 26 September.

The AGM also took place that evening. Maureen presented the 2005 Annual Report, which includes thanks to the many supporters of PMP and the accounts.

Thanks go to volunteer Maria Nolan who went along to support, especially as it was her birthday.

70s Disco in aid of NDCS 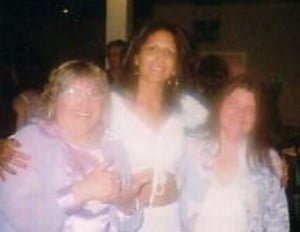 This event was organised by Pam Lazano in support of the National Deaf Children’s Society (NDCS). The evening was a great success.

Hands That Talk
Jean Shingler of the ‘Young at Heart’ Group at the Southport Salvation Army recently wrote a poem entitled Hands That Talk – please read it.

Line dancing at the Leisure Lakes

Our day at the Leisure Lakes on 27 August proved to be very successful. We sold teddies, some word searches, and a few fridge magnets raising over £45. The volunteers during the afternoon were Maria & Natalie Nolan, Mavis Husbands and Maria Lavender.

Barbara Shields and Maureen Doyle stayed for the presentation of books and videos from the Phoenix Rebels in the evening. We sold even more teddies raising over £42. Maureen also gave away many word searches for free, and if people return them completed, they will receive a certificate.

We also met Greywolf, who does The Trilogy and poems in North American Indian Sign Language. He may come and give PMP members a demonstration in the future.

SignHealth has developed software to help health professionals in primary care (GP’s, nurses, receptionists, etc.) communicate with their patients when an interpreter is not available.

The Department of Health report Mental Health and Deafness …. Towards Equity and Access, published in March 2005, recommends SignHealth is made available in primary and secondary care as speedily as possible. The recently published A Practice Guide to Ethnic Monitoring in the NHS and Social Care also recommends that SignHealth is purchased by health trusts.

A demo of the software can be seen on the SignHealth website. To use this, you must enter the following password to get in: tghdse49

Hilary and Ruth have sent comments about their experiences with Maureen and the group, and these appear in the 2005 Annual Report. 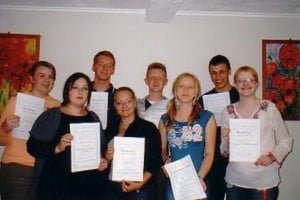 Millennium Volunteers were introduced to the basics of Sign Language at the C.V.S. on Yellow House Lane in Southport on 25 & 26 July.

Here are some comments from the Millennium Volunteers:

The classes were highly enjoyable … Maureen made me realise how important sign language is and how enjoyable it can be.

Maureen’s clear enthusiasm and passion for the lessons shone through … made the course thoroughly enjoyable.

This was great fun! Loved the songs.

The speaker showed great enthusiasm in sign language and really made me want to study more into sign language.

Southport Deaf Club AGM
The Southport Centre for the Deaf held its 107th AGM on 20 July. It was mentioned that the Tuesday Morning Club has had a great year, and they still have a busy calendar ahead with some interesting trips planned.

Environmental aids
Environmental aids are now available from the W.R.V.S. at the Community Voluntary Service (C.V.S.) on Yellow House Lane, Southport. It is open Tuesdays 10am-12pm and Thursdays 12-2.30pm.

Please note there is an appointment system as they are very busy with this new service.