Sefton Carer’s Day at Dunes Leisure Complex
The Sefton Carers’ event at Dunes on June 16 was well attended. Phil Rodwell from southport.gb chatted to all the exhibitors and took photographs. Many people stopped to chat to Maureen about her work in the community.

A video was made for Sefton Council of the exhibitors, and Maureen was able to introduce herself and PMP as well as demonstrate the Manual Alphabet and sign a bit of Old MacDonald Had A Farm. 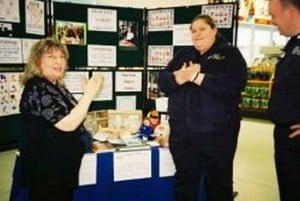 Members of Services for Deaf/Hard-of-hearing from the Fire & Rescue Service came to ASDA in May to support PMP during Deaf Awareness Week.

We gave out their leaflets informing people of their service to provide every home in Merseyside with a ‘Home Safety Check’ and smoke alarms.

Members of the Fire & Rescue Service will be giving a Fire Safety talk at the Marion Centre on Monday, 26 September. The Fire Safety team has two Deaf Advocates so this talk will be especially useful for deaf people using sign language.

This talk is open to PMP members, members of local Deaf Clubs, and anyone learning sign language. 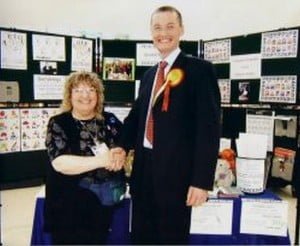 Local Labour candidate Paul Brant made time during his busy schedule to visit the ASDA store on Derby Road during the Election campaign to chat to Maureen Doyle about PMP and their voluntary work in the community.

This was the third year that ASDA and Southport’s local Sign Language group, Practice Makes Perfect, have worked together to support Deaf Awareness Week.

Maureen and 10 volunteers from ‘Practice Makes Perfect’ had an interesting time giving out information, talking about Deaf Awareness and Sign Language. Customers were helped with their bag packing, and a total of £202.50 was raised for the group.

PMP sends a big THANK YOU to ASDA and everyone who supported us.

PMP is to start a video library for its members. The following videos will be available:

Members of PMP went on a trip to Pilkington’s Glass Factory with Southport’s HoH/Deaf Club in March. Maureen acted as Communicator for the day.

The glass blowing demonstration was very interesting, and as Maureen translated and signed Jackie Aughton videoed her as well as some of the demonstration. A short video will be available soon.

Accreditation certificate for Maureen
Maureen Doyle has received her Accreditation Certificate for the work she did in 2002 on The Citizens’ Action Millennium Award Programme in conjunction with her sign language project ‘Practice Makes Perfect’. You can see a copy of the certificate here.

The certificate was confirmed by the Quality Committee of the South of England Open College Network. The results were:

Shelbourne PROBUS talk
Maureen Doyle gave a talk to the Shelbourne PROBUS group on 24 February. After a short introduction on how, when, where and why she started PMP, Maureen got those present doing a brief practice of the Manual Alphabet.

The person leading the PROBUS group said to Maureen when he thanked her at the end she had them “eating out of her hand!” She actually had them signing and singing Sing A Rainbow, Fish Alive, Old McDonald and Farmers In His Den. Maureen says it was good fun, and a donation of £25 was made towards PMP funds.

Following this talk, Maureen received a letter of thanks with a donation of £10 from the Shelbourne PROBUS Club. You can read the letter here.

Monday classes move venue
On 14 February, the Monday sign language class moved venue to the Marian Centre on Bath Street North from Elim Church on Manchester Road. The Marian Centre has been refurbished and has disabled access, disabled toilets and kitchen facilities for refreshments. Please note it is a ‘No Smoking’ centre.

There will be a weekly raffle and a monthly bingo session to raise funds.

New members are welcome, but please e-mail Maureen to register your name and details.