The prestigious Spirit of Merseyside Awards took place at Liverpool Cathedral on Thursday 17 June 2010. This event celebrated the hard work, dedication and effort of groups who have received funding from the Community Foundation for Merseyside over the past 12 months.

Also shortlisted for the Project of the Year Award were Southport Sub Aqua, Southport Formby Athletes and Bluey Baloo.

The winners were decided by an independent panel of judges, who visited the groups to ask questions about their projects. New Reality Media filmed all the groups and the films were shown at the event as part of the award celebration, which included a 3 course meal and entertainment.

Practice Makes Perfect won the Grassroots Project of the Year Award at Liverpool Cathedral last Thursday. Well done to everyone! Photos from the Awards here.

Sutton Sign-writing Workshop
Our first Sutton Sign Writing workshop was held on 27 August. Suzanne Pach (from Holland) was the tutor for the day. Included to take home were some new SSW learning/teaching aids & resources just made to aid learning. Maureen also included her own “Basics of Sign Language” DVD so users could see her technique of helping others to learn. This was filmed live at one of our sessions.

Photos from the Sutton Sign Writing Workshop are here.

The new BSL SignWriting Dictionary has been set up by Valerie Sutton, the creator of SignWriting and it is online now for British Sign Language users to learn from and to add their own signs. Free downloads of lessons in SignWriting here. 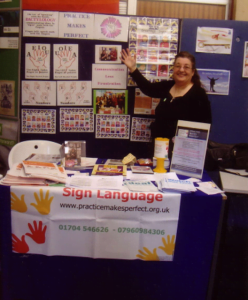 Our stall at Southport College was very well received. 100s of fingerspelling posters, bookmarks and sign language booklets were given away at the event in April.

Thanks to Mavis for volunteering for the day and looking after the stall whilst Maureen did three workshops for both pupils and teachers.

Event at Bishop David Shepherd School
The event in March 2010 at Bishop David Shepherd School was a great success. Maureen presented three 45 minute workshops to 6 classes and their teachers. The school has planned to watch our DVD on Mondays to learn and practice signing together. Everyone joined in and had a fun time. Thanks to Jenny Iveson for volunteering and being there at all the sessions. 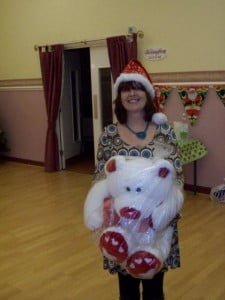 Our Christmas party was held on 14 December. Thanks to everyone for bringing contributions for the buffet table. Sheila brought hot sausage rolls.

It was an opportunity to celebrate the new funding from The Big Lottery fund. They awarded us £6.115 for running costs for 1 year. We have received the cheque.

Carol G. popped in to see us and made a donation of £20 towards our funds.

Keziah sang a couple of songs for us, including “How much is that doggie in the window?” with her poodle puppy Ruby, who joined in with barks at the right places as Keziah has been training her. We sang and signed “Silent Night”, our favourite Carol.

Donations
We received £6,115 from Awards for All. It will make a difference to our group as it will help to cover the running costs for 2010 (excluding venue hire).

We received a donation of £150 from the Duchy of Lancaster. Many thanks for this kind addition to our funds.

Meal at the Pageant 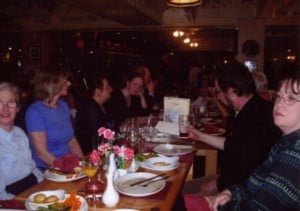 Funded by Grassroots, our meal at the Pageant was marvelous. 22 people attended and every one really enjoyed the evening. The food was fantastic.

It’s been a while since we have seen Hilary and Ruth so we were all happy they made it to the meal. It was lovely to see them again. My thanks to everyone for making it a special evening. Thanks to Margie for bringing and looking after Mary from Crosby. Our youngest learner Lucas was there too with his Mum and Grandmother, Maria, our Treasurer.

The day after I received a magnificent bouquet of flowers from Mary. Many thanks to Mary for them. My thanks also to Hilary and Ruth for their Thank You card. 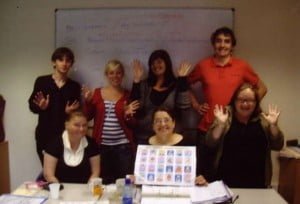 In August 2009 members of the YAT Group attended Workshops at the Joint Learning Centre in Yellowhouse Lane, Southport.

Their intensive training in the basics of Sign Language and other communications skills were well received. On Day 2 the students were able to sign questions and have a general conversation with our deaf volunteer Mavis Husbands. It is a great achievement for them all.

Monitoring forms for training courses are always completed and these show that everyone enjoyed the workshops. All forms are available to view on request.

BSL e-book for iPhone/iPod
Nick Sturley, in association with DeafEducate, has announced the introduction of the world’s first ever British Sign Language (BSL) ebook app for the Apple iPhone and iPod Touch, covering the first four volumes of his Tales From Signtown fairytales.