Funding news
A £1,000 cheque has been received from P. H. Holt Foundation. Many thanks go to them for this funding, which will help our group tremendously.

Thanks to a Grassroots Award of £4,710, PMP will be able to secure their Marian Centre venue for the next 3 years. The award will also fund BSL Level 2 training for volunteer Mavis Husbands. 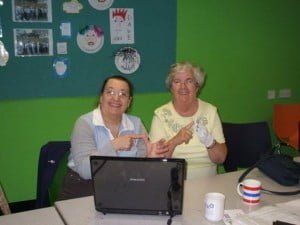 Milly using laptopOur new laptop, paid for with a donation of £500 from the Henby Trust, has been very popular at each of our venues. Members have been using the fingerspelling DVD quiz setting at its slowest level, and this has helped with receptive skills.

The photo shows Milly, our newest member, using the laptop at the Joint Learning Centre on Yellow House Lane.

We thank the Henby Trust for their very kind contribution.

Certificates
10-year-old Dominic Woods has received his first certificate for finger spelling the alphabet. He accomplished this within half an hour of attending his first class at Practice Makes Perfect.

Jennifer Iveson on the Friday course received her first finger spelling certificate on 1 May.

Some of our other members have also received certificates for passing BSL 101 and 102. Photos of all these people receiving their certificates can be found on this page celebrating their achievements.

Brighter Living Partnership
Maureen and Mavis attended another Brighter Living Partnership meeting on 30 April. Many excellent networking contacts were made with various groups, including the police, the Diabetes Group, the newly formed Transition Group and many others. Our handouts are to be inserted into the BLP information packs that they deliver to members of the community. 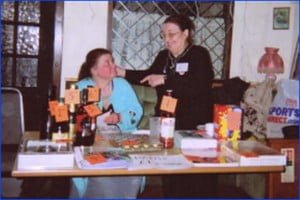 Mavis and Maureen at their recent Art group exhibition raising awareness to the work of Practice Makes Perfect and what it has to offer.

Hand made cards were sold to raise funds.

Death by Deafness
Alex Nowak is directing a short film about a teenage deaf girl who goes through depression, isolation and neglect with devastating consequences. The film, Death by Deafness, has some talented deaf and hearing actors involved. There will be signing in parts of the film, but subtitles will be present throughout so all will understand. More on the project here.

Computer program helps lip-reading skills
A computer program* to help people learn to lipread has been developed by David Smith. More information is available on this website. It has been added to our Links page.

*Please note that the program will only run on Windows computers that have the Microsoft .NET Framework installed; Windows Vista has this installed by default, but other versions do not. It can be downloaded from the Microsoft website.

Maureen Doyle and Mavis Husbands were at the college from 9.30am till 3.30pm both days. Display boards and table information leaflets were available for the students and staff.

Maureen gave talks on both days to the students and staff.

The sessions at Southport Arts Centre on Thursdays are therefore now cancelled. The Monday sessions continue as normal at the Marian Centre on Bath Street North from 6 to 8pm.

18 young people attended a Sign Language and Deaf Awareness session at the Joint Learning Centre on Yellow House Lane on 11 March. Maureen thanks the centre for the donation of £35, and for allowing us to use the centre for our classes from April 2009.

BSL Zone
OFCOM has welcomed the launch of the Community Channel’s BSL Zone, which is dedicated to showing TV programmes presented in BSL.

Newcomers
Over the last few months we have had 9 new members, including 3-year-old Jacob and 10-year-old Dominic. We have an audiologist (Level 2) and a support worker for a deaf student (Level 3).

Dominic mastered the finger spelling alphabet in just half an hour, and then started helping another new member Pam, who is 77, with her hand shapes with the finger alphabet. This was an inspirational “bridging the age gap” moment. Dominic received his first certificate on 11 May.

Earlier in the year we welcomed two new members; Reetha from Finland, who introduced us to Finnish signs whilst learning BSL, and Joya from Poland.

We welcome them all.

www.signedstories.com gives free, online access to the wonderful world of children’s literature with BSL, sound, animation and text. And there’s a wealth of storytelling information and advice for parents, carers and teachers.

CACDP changes its name
CACDP is now known as Signature.